Stan and Sally Sutton, with the help of their children Steve and Sherry, bought the Sutton’s property in 1976.

We opened our doors that June as a seasonal farm stand, selling seasonal veggies, fruit, pumpkins, cider — and of course our famous cider donuts. At the time, we were one of the few businesses on Route 9. We also sold cold cut sandwiches and salads, and there was such a demand for it that we decided to add a restaurant, circa 1976. It was an instant success.

Steve’s wife Donna became involved in the business, bringing her love of retail and design into play. She could see that adding that adding a gift shop would be a real asset to the business.

Over the years Sutton’s grew and expanded to include a marketplace that included a garden center, toy store, and clothing department; quality shopping that we still proudly offer today. For a number of years, we carried furniture as well.

Flash Forward to present day — Steve Sutton passed away in April of 2006 after a long illness. A few years later, Sherry decided to retire as store manger. Several years before Steve died, Steve and Donna’s son Gabe moved back from Oregon and opened a restaurant with his parents. After the loss of his father, he took the reins and became more involved in the daily operations at the marketplace.

In 2008, Steve and Donna’s daughter, Jane, moved back from Vermont with her husband to help with the business as well.

In the fall of 2014, Gabe decided he had a tremendous interest in the growing brewery business in our area and branched out on his own to found the Hoppy Trails Brew Bus.

Donna, Jane and her husband now operate the marketplace with the help of their many longtime employees. With many corporate businesses moving in to the area, Sutton’s motivation is to keep the business as local as possible.

We strive to be a step above the rest while still maintaining a “mom and pop feel” that has made us so successful throughout the years. 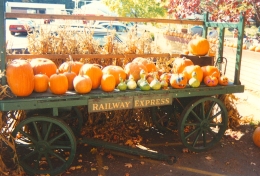 Jane Sutton, back when

Family owned and operated for more than 40 years, Sutton’s Market Place is now home to Farmstead Flatbread and Starla’s Shoppe.